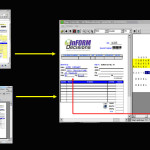 Perhaps you have worked in a shop where someone has embedded HP PCL into the RPG code of an application and every time someone wants to underline or boldface a word in a printed report, a programmer has to go in and change the code. That is what I call job security.

Occasionally, inFORM Decisions, which specializes in paperless document automation solutions, will be called in by a company to sift through a major legacy application and very carefully rip out all the embedded PCL. It’s likely that the company’s own programming staff could handle this tiresome task, but management doesn’t want to burden their own people with the job and risk having someone quit. Hiring an outside firm to do the dirty work is tantamount to sending Clint Eastwood, aka Dirty Harry, on the rough assignment to track down an embedded San Francisco serial killer. Some people always get the dirty jobs.

inFORM Decisions is on a course today to stop the spread of embedded PCL code, however, with the latest version of iMap, its unique graphical data-mapping solution. An adjunct to inFORM’s iDocs document automation engine, iMap 3.0 allows users to simply and affordably map both spool file data—and now database data—into electronic forms.

“With iMap, we provide users a means to map their data to a form using any designer they want to, up to and including Microsoft Word,” says Dan Forster, president and CEO of inFORM Decisions. “We call it an open designer solution.” Indeed, with iMap, users don’t have to purchase a proprietary designer in order to map spool file data; they can use any one of a number of tools with which they’re comfortable, such as Excel or even obsolete JetForm, which today is no longer supported. For those shops that might have a hundred forms built with the JetForm designer, it means they aren’t forced to redesign all their forms from scratch but can begin with iMap using what they already have.

While most shops find it easier to map data from spool files to an electronic form, increasingly companies are finding they may want to map data from a database file directly to the form. Or perhaps they want to mix and match; most of the data needs to come from a spool file, but let’s pull the customer account number or an email address from a database file. That is now possible with iMap 3.0.

As moving data around digitally becomes more common and printing it to paper becomes less appealing, users are learning about the inherent flexibility that digital data can afford them. “Usually each page of the spool file matches up with the form, but occasionally you run into situations where the spool file data may not be the same. That’s when you want to do conditional mapping,” says Forster.

“With iMap 1.0, we could drag the data over and maybe change the font. With iMap 3.0, the user can define fields for conditional applications including database mapping, image placement, and routing,” he says. “Perhaps one customer wants an invoice emailed, but another wants it faxed. You can now specify all that in a graphical environment without having to resort to the green-screen. It’s done with menus in iMap. You can even specify colors [providing you have a PCL 5c-level color laser printer]. Once you have the output the way you want it, you upload it into iDocs on the iSeries, and then everything runs natively at that point.”

“This latest version of iMap is significant. It’s big stuff for us,” says Forster. “It does a ton of things and basically adds a lot more intelligence to the fields. In the old days, this sort of conditional mapping all was done on the green-screen. Today, it can be done on a GUI even by a business user. Where IT really benefits from all this is in the distribution; electronic documents make distribution a breeze.”

iMap runs in both Windows XP and Windows 7 environments, either 32- or 64-bit, and requires iDocs to be running on the System i. 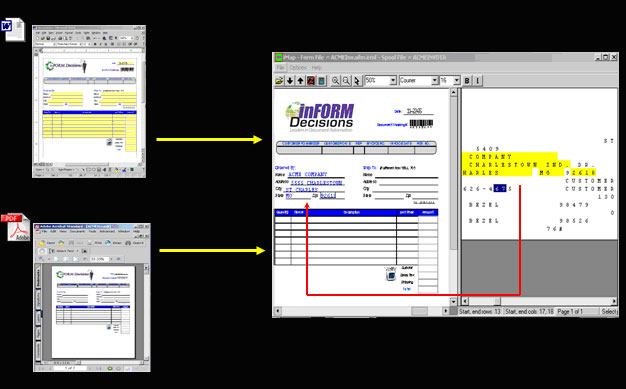 To learn more about inFORM Decisions and the benefits of going paperless, visit www.informdecisions.com or phone 1.949.709.5838.

Note: Due to the strong legal and privacy constraints in the hospitality and gaming industries, inFORM Decisions cannot directly quote users, which is why there is no attribution for the quotes in this article. Because of this, we understand there might be some possible reader skepticism; however, we can provide individual customer references to prospects upon request.

Chris Smith was the Senior News Editor at MC Press Online from 2007 to 2012 and was responsible for the news content on the company’s Web site. Chris has been writing about the IBM midrange industry since 1992 when he signed on with Duke Communications as West Coast Editor of News 3X/400. With a bachelor’s from the University of California at Berkeley, where he majored in English and minored in Journalism, and a master’s in Journalism from the University of Colorado, Boulder, Chris later studied computer programming and AS/400 operations at Long Beach City College. An award-winning writer with two Maggie Awards, four business books, and a collection of poetry to his credit, Chris began his newspaper career as a reporter in northern California, later worked as night city editor for the Rocky Mountain News in Denver, and went on to edit a national cable television trade magazine. He was Communications Manager for McDonnell Douglas Corp. in Long Beach, Calif., before it merged with Boeing, and oversaw implementation of the company’s first IBM desktop publishing system there. An editor for MC Press Online since 2007, Chris has authored some 300 articles on a broad range of topics surrounding the IBM midrange platform that have appeared in the company’s eight industry-leading newsletters.