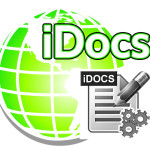 inFORM Decisions recently updated its suite of IBM i-based document management software with the introduction of iDocs version 6.6. New capabilities in the release will be of particular interest to customers working in Asia, those who use lots of barcodes, and those who need to drive complex workflows based on variables in their spool files.Support for double-byte character sets (DBCS) is arguably the most important new features in iDocs 6.6. DBCS-enablement is an involved process that allows a software product to support the character-based alphabets used in some Asian languages, including Chinese and Japanese.

The capability to support double-byte languages is a big deal for inFORM, says president Dan Forster. “Support for double byte is a very unique and powerful capability for a number of our IBM i customers who are based out of, or work with, companies in the Pacific Rim,” he says in a press release.

iDocs has also gotten more flexible in its input and output with version 6.6, which supports the generation of variable sized barcodes for output, and the capability to read different size optical character recognition (OCR) type fonts for input into the document management system. In the past, these OCS type fonts had to be a fixed size, Forster says.

inFORM also improved its SmartRouter functionality, which the company introduced about three years ago. SmartRouter allows users to direct or re-direct output, burst, sort, and group reports and forms based on spool file attributes and/or spool file content.

With the version 6.6 release, inFORM now supports multiple key fields with “and/or” conditions to select email, fax, and printer output queues from an external database. inFORM says the enhancement provides greater flexibility, because every document to be distributed (such as an invoice) can be emailed, faxed, printed, and/or distributed to any defined output queues. “The cost savings for implementing this with any document management system is significant,” Forster says.

The new release also gains better generation of color PDFs. While the product could generate color PDFs directly on the IBM i server before, the process was slow and didn’t generate documents with the requisite resolution. inFORM’s enhancements have bolstered the resolution and performance of color PDF generation, inFORM says.

Other enhancements were made in the areas of complex conditional mapping; GUI database mapping support; and dynamic library name support, the company says. For more information, see www.informdecisions.com.